The 16 days of Activism event was Organised by the VSHC CCOHSI Team with the assistance of the Ministry of Women, Children and Poverty Alleviation.
Other Stakeholders: Ministry of Youth and Sports, Ministry of Health and Medical Services, Empower Pacific, Fiji Police Force.
Number of attendees: Approximately 200.

Between the 25th of November and the 10th of December the United Nations has set aside 16 Days for Activism towards elimination of Violence Against Women. To mark this event, on the 8th of December, Viseisei Sai Health Centre (VSHC) in collaboration with Ministry Women, Children and Poverty Alleviation, Ministry of Youth and Sports, Ministry of Health and Medical Services , Empower Pacific, the European Union (EU), Lautoka Market Vendors Association, Ba Province Community Health Workers, LGBT community and women's group such as the Soqosoqo Vakamarama gathered in solidarity at Lautoka's Shirley Park to raise awareness to Eliminate Violence Against Women (EVAW).  Women must be recognised as equal partners who should be appreciated, valued and respected; and have the right to live in dignity and without any form of violence perpetrated against them.
Violence against women is far too common around the world where one in three women are affected by some form of violence. In Fiji over 60% of women have reported experiencing intimate partner violence in their lifetime.
Viseisei Sai Health Centre (VSHC) has a mission to empower women and girls especially in remote and rural communities. Through partnership with the European Union (EU), VSHC has conducted successfully two major Human Rights projects. The first was Strengthening Rights of Rural Women and Girls in providing them with Knowledge, Access and Control of Their Reproductive Health which was undertaken between 2012 and December 2014 where 11,000 women and girls were provided with information on their rights. Currently VSHC in partnership with Empower Pacific is implementing a project titled; Collective Community Ownership of Health and Social Issues where 30 communities have been adopted for empowerment to tackle harmful lifestyle choices including social issues such as gender based violence and child protection.

Viseisei Sai Health Centre and Empower Pacific in partnership with European Union and relevant government stakeholders, invited all women, men, stakeholders and community organisations to participate in a march and program to raise awareness on violence against women and its impact.  The march through Lautoka ended at Shirley Park where presentations from key stakeholders took place.  This event was a call on everyone, male and female, in every community to help forge a more inclusive, gender equal world.  It enabled us as a community to raise awareness of gender based violence against women and girls and highlighted the impact of such actions.  Events such as these work towards raising awareness on women’s rights, education, gender based violence, reproductive and maternal health, women’s empowerment and gender equality. 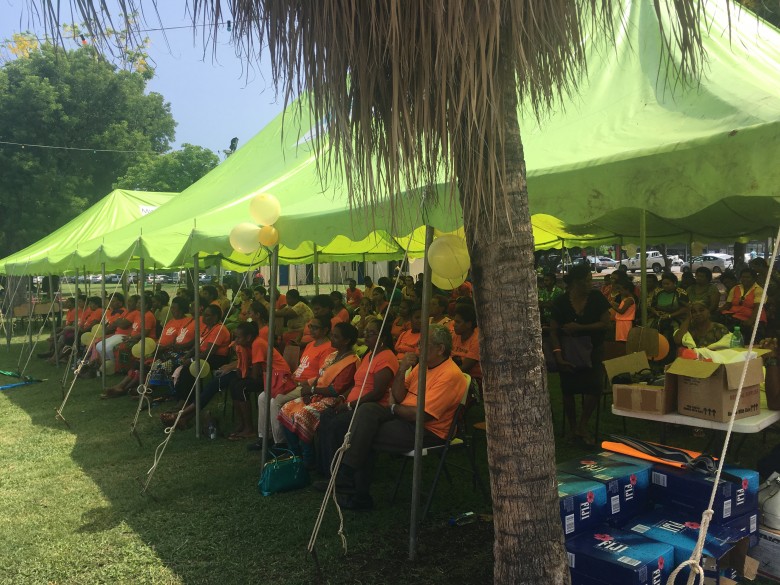 Registration opened at 8.30am and resulted in approximately 200 people participating in the march and the programme at Shirley Park. The Chief Guest for the event was the EU Team Leader of Natural Resources and Governance, Ms Ingrid Swinnen. 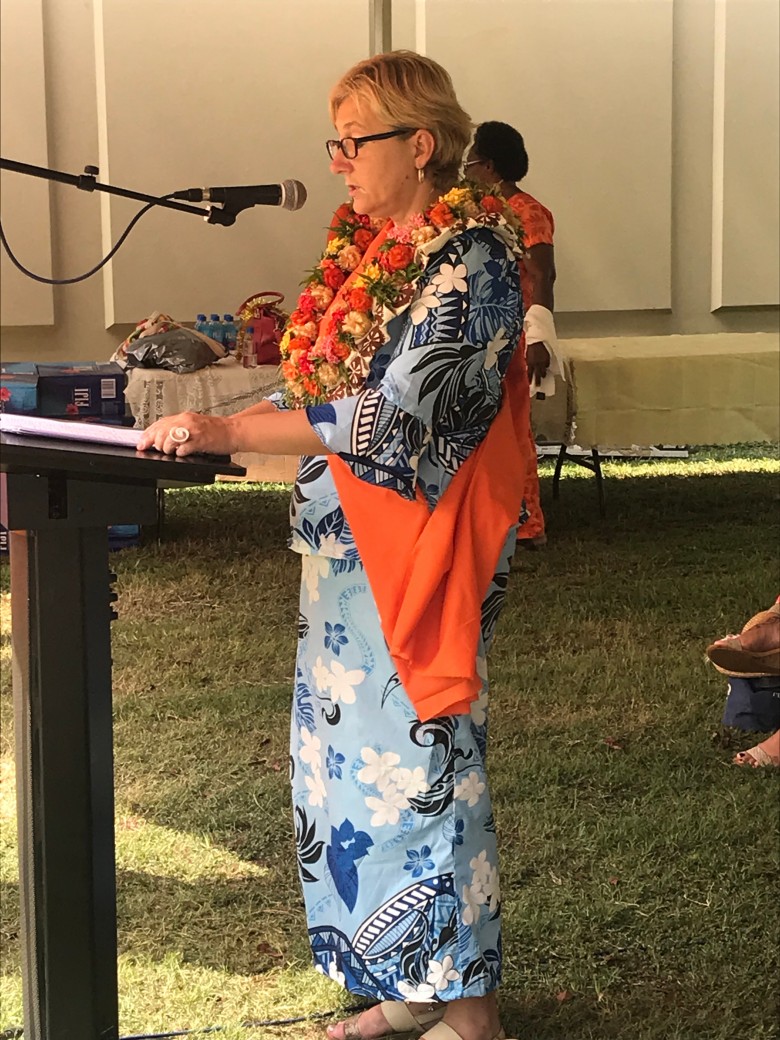 Banners calling for action included the phrases Eliminate Violence Against Women (EVAW); Empowerment of Women, Gender Equality, ‘Women’s Rights as Human Rights’, and ‘Stop the Silence Against Violence’. Other banners, which praised the values of women, as well as human values of love, peace, non violence, and right conduct were used during the march. The other stakeholders had their own banners as well - all focusing on similar themes. 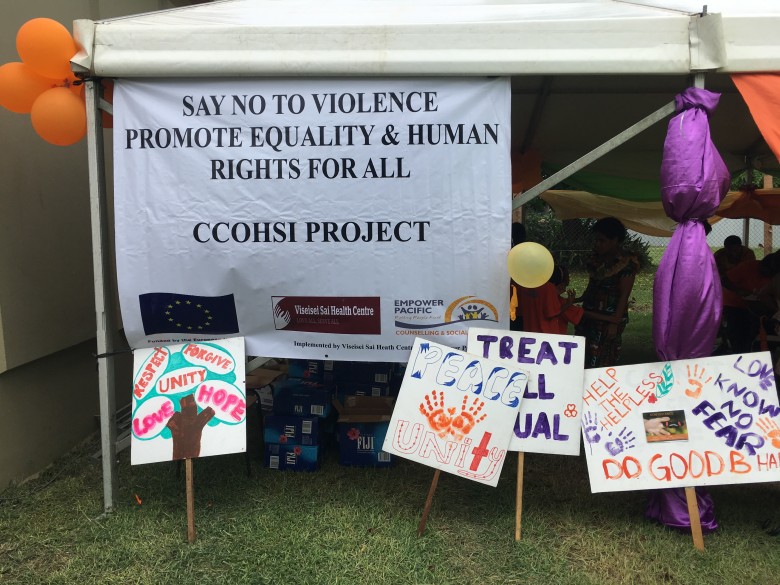 March participants were organised into groups and were encouraged to hold their own banners with their own message in celebration of women. The march commenced from Shirley Park at 10am and, escorted by Fiji Police, travelled along Waterfront Rd, Naviti St, Yasawa St and Vitogo Pde before returning to Shirley Park 20 minutes later. 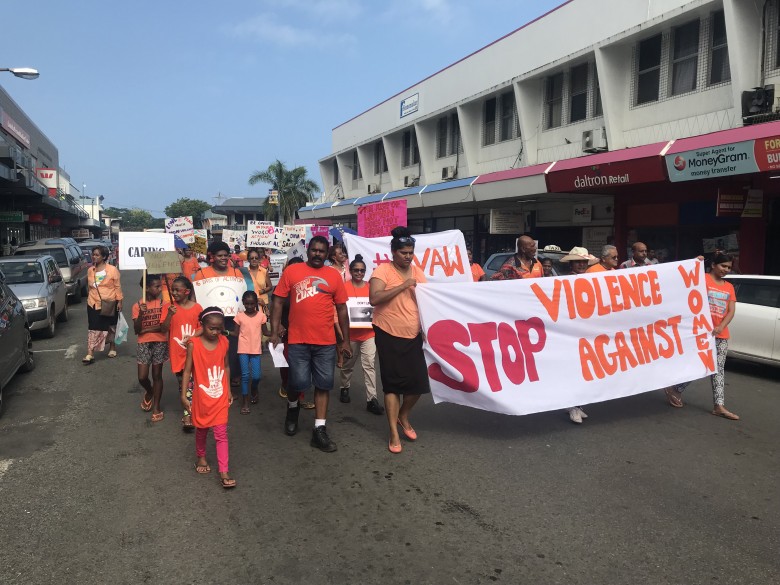 VSHC leading the march through Lautoka. 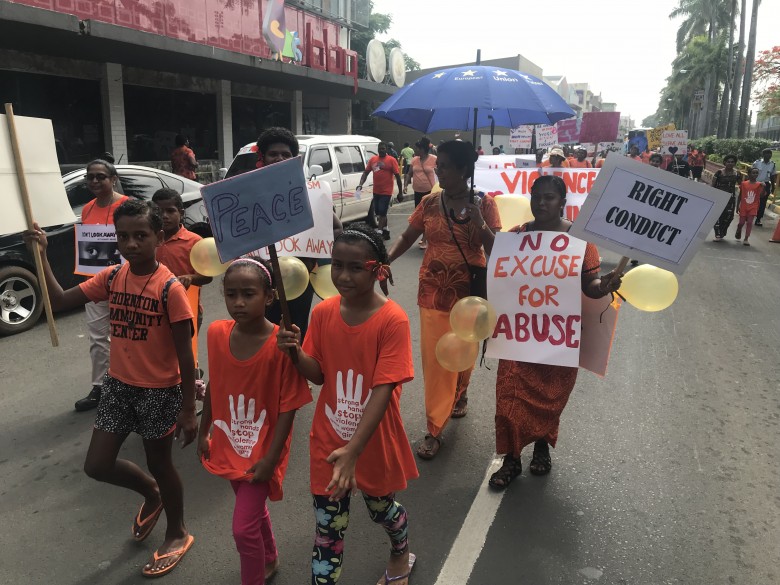 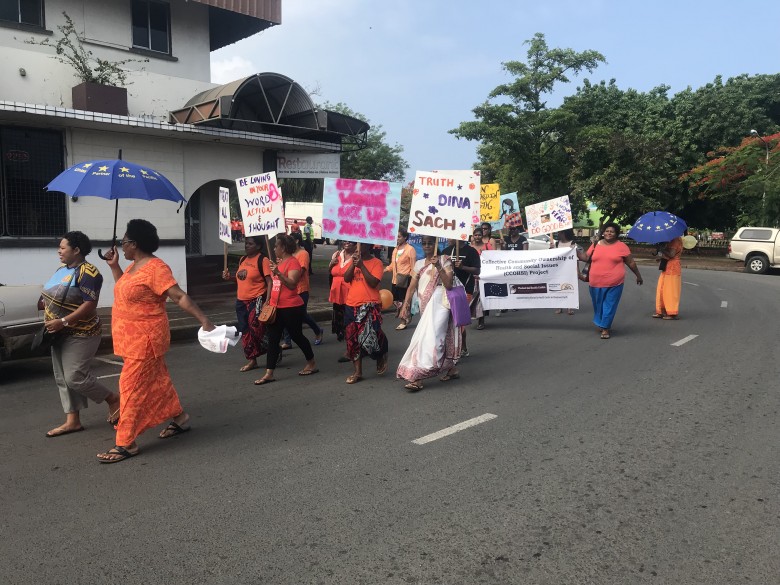 The march through Lautoka. 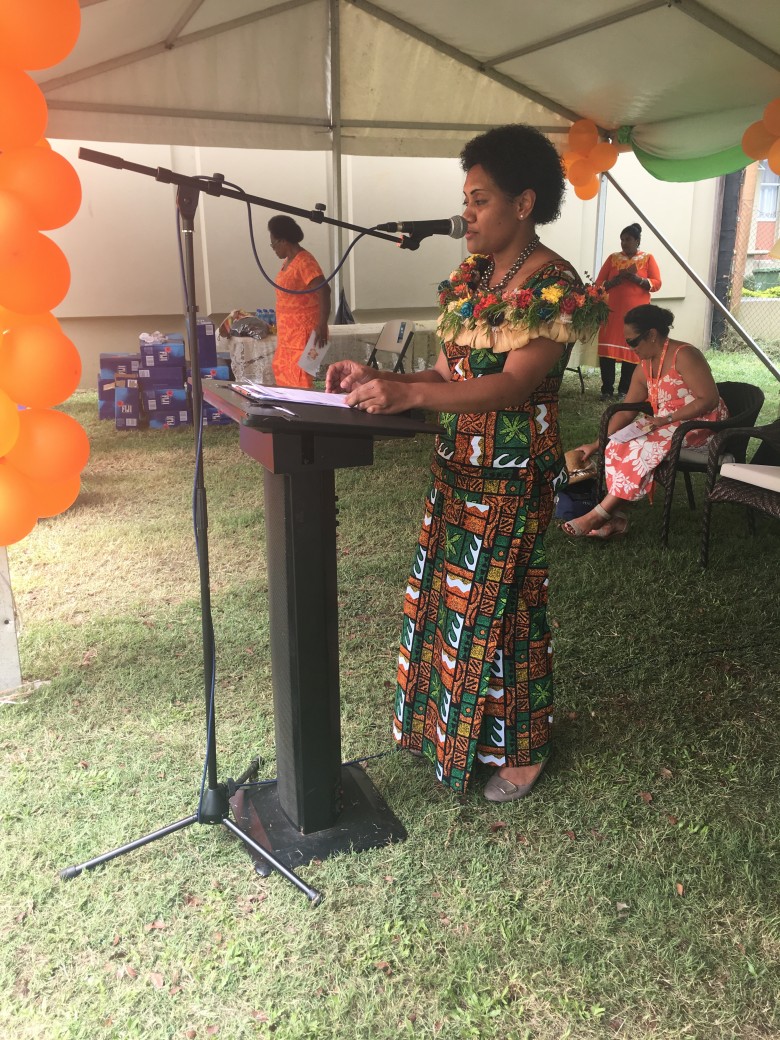 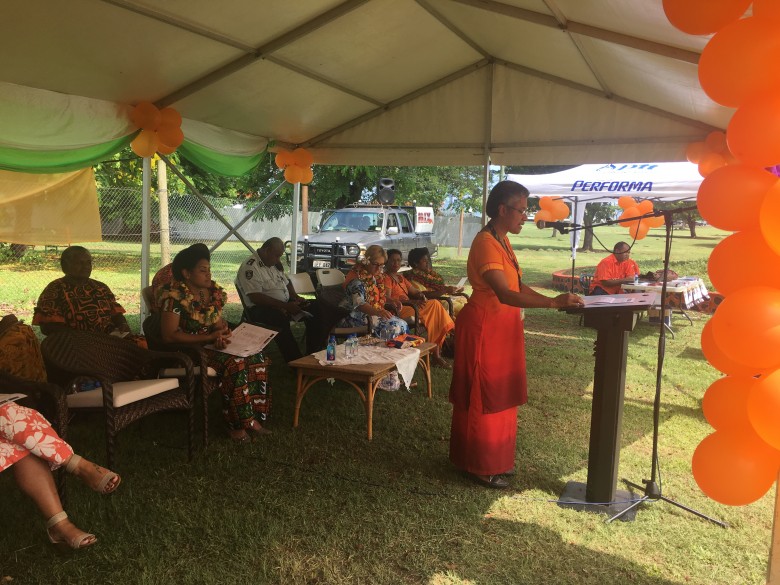 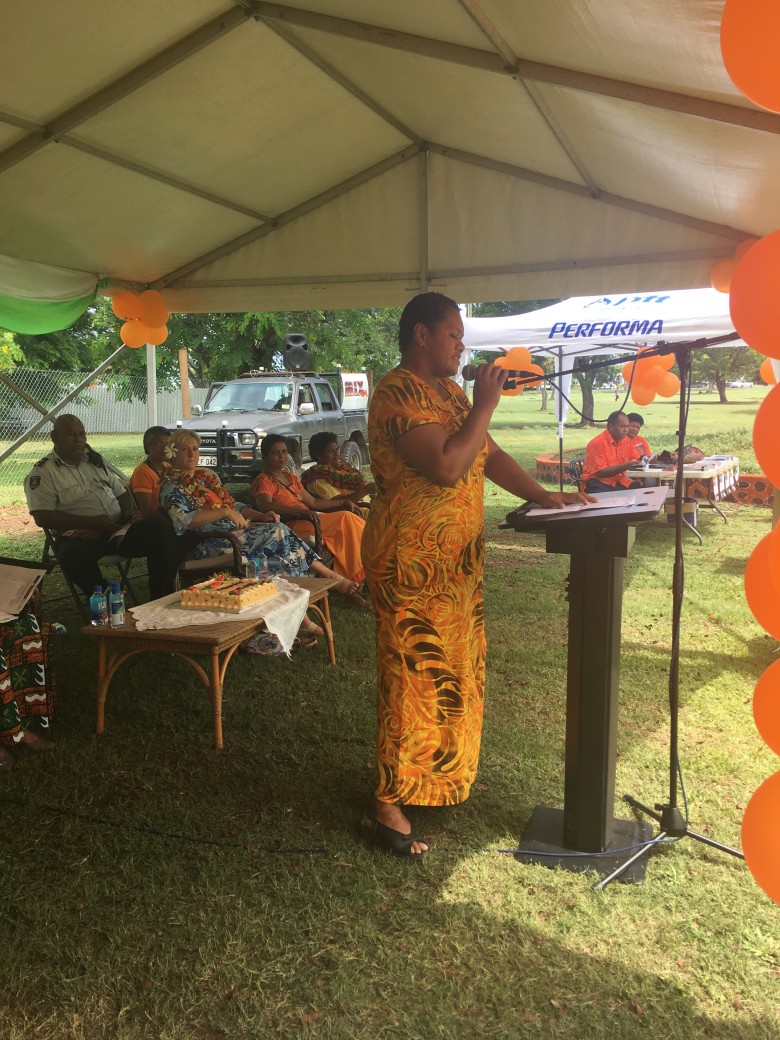 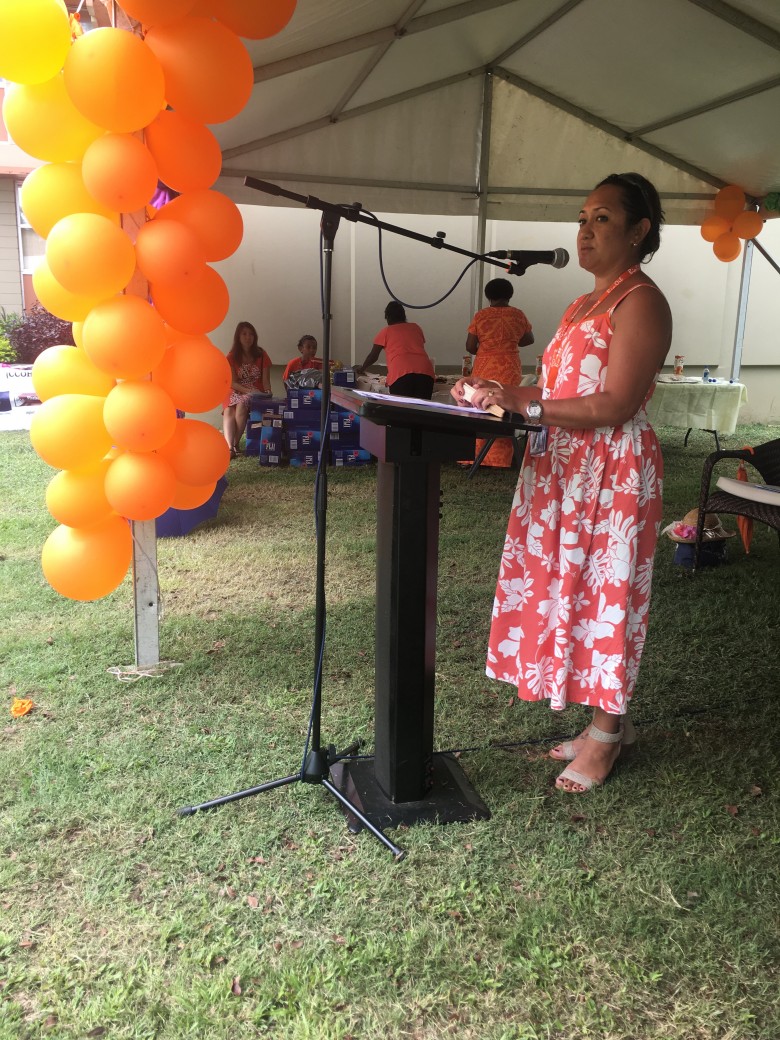 These were followed by two songs dedicated to protecting women, beautifully sung by members of the Yavusa Koi Vuda Male Choir.  Various women (including Community health Workers, market vendors, and Dr Amanda Hill) were invited to add their views on the subject of VAW. Women were celebrated by joining in the dance with the chief guest and speakers. The cake cutting ceremony followed before declaring the official program complete. Refreshments and cake were provided to all guests and march participants. 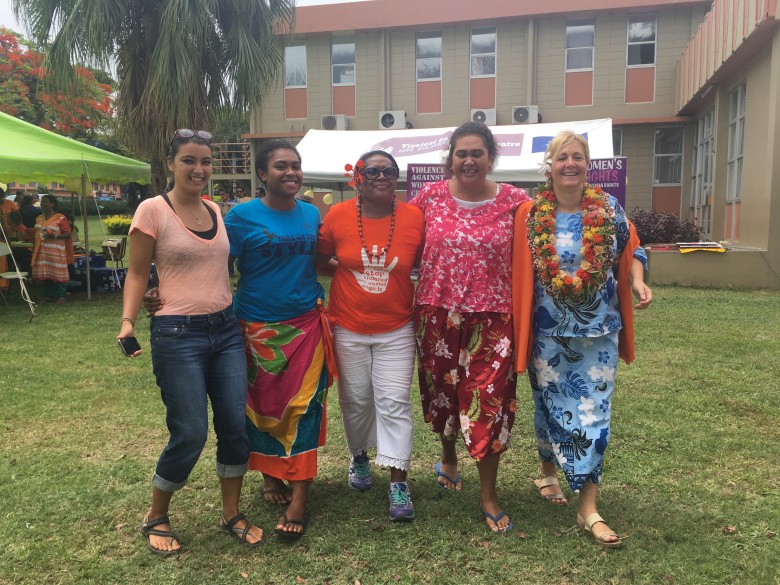 Ms. Ingrid Swinnen and march participants dancing after the end of the program. 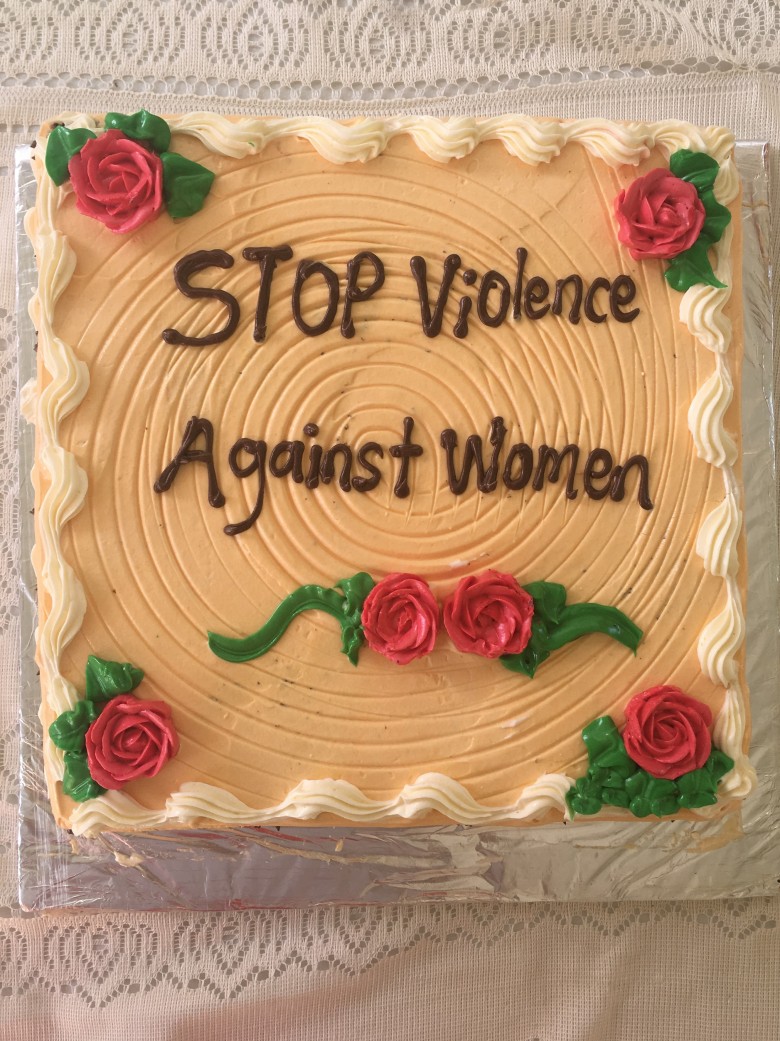 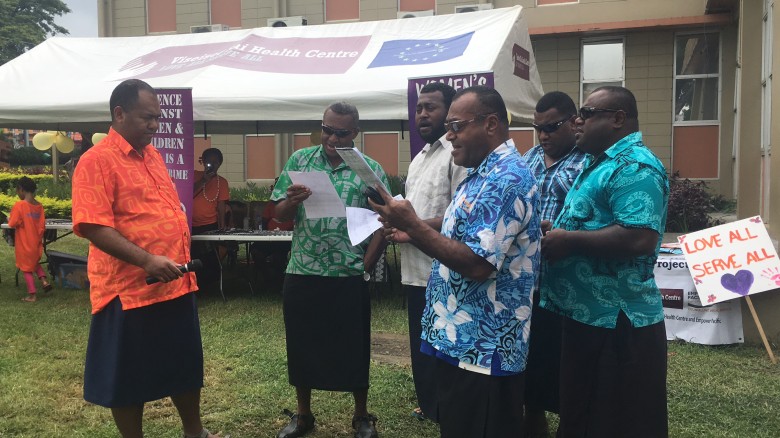 VSHC is a recognized as a leader in human rights advocacy among CSOs as well as Government and Non-Government entities at local level.  This resulted in strong collaboration from stakeholders throughout the organisation of the event and on the day.  We would like to thank our major sponsors European Union in the Pacific and the Ministry of Women, Children and Poverty Alleviation as well as assistance and support from the various organisations listed below without whom this day could not have been successful:

Fiji Police – for providing an escort through Lautoka for the March and attending the day.
Ministry of Health and Medical Services – for the tents and set up.
Ministry of Women, Children and Poverty Alleviation – for being an integral member of the organising committee.
Mix FM – for the sound system on the day.
Tanoa Waterfront Hotel – for the provision of chairs, table and lectern.
Yavusa Koi Vuda Male Choir – for their attendance and beautiful voices.
Lautoka Hub Centre – for storage of chairs pre-event.
Fiji Water – for water donation.
Empower Pacific – for being on the organising committee.
Lautoka City Council – for free electricity on the day and provision of Shirley Park.
Fiji Salvation Army, Lauwaki – for chairs.
Clyde Accrow/Y.P Reddy – for providing the stage and marquee set-up for the event.
Mrs. Adi Varanisese Ligalevu – for her financial donation towards the sound system hire.
Ministry of Youth and Sports – for attendance and assistance organising the event.
Keshwa Mart Enterprises – for donating the ceremonial cake.